The Music Box Theatre – once the most appropriately named on Brodway, as it showed nothing but musicals for four years since its opening in 1921 – is a Broadway theatre situated at 239 West 45th Street, Midtown Manhattan. Build especially to house Berlin’s famous Music Box Revues, the theater was designed by architect C. Howard Crane and constructed by composer Irving Berlin and producer Sam H. Harris. Since its first play in 1925, the venue played host to a string of hugely popular works by playwrights George S. Kaufman and Moss Hart.

The Music Box Theatre is among the smallest of Broadway houses, with a seating capacity of just 860. It’s unique design features unusually round and large box seats, described humorously as “ashtrays,” by Dame Edna during her series of successful performances at the theatre.

The design of the Music Box is so much-loved that it directly inspired that of the Brown Theatre in Louisville, Kentucky! 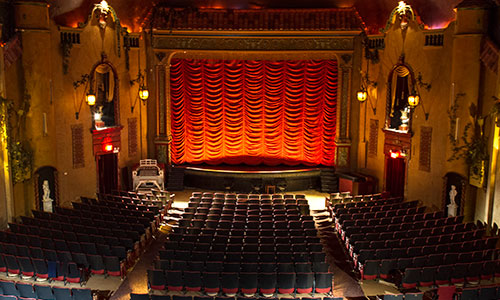